Alongside sample sales, Douglas Booth and a nice cup of tea, one of life’s greatest pleasures is dressing up. Lucky for me, then, that Halloween in Dubai is something they don’t do by halves. Not that I’d expect anything less from a city where big is good but bigger is best. Last year’s debauched Last Tuesday Society ball in London was going to take some beating, but the 5,000-strong shindig at Zero Gravity was happily up to the challenge. With a Dhs5,000 prize in the balance, I decided to get the big guns out, looking to make-up empresarios Inglot and the best hair stylist in Dubai, Jehnna Mahoney, to help me on my mission to become a Dia de los Muertos princess. And yes, that is a Barbie in my hair. Subtlety? Er, no thanks. 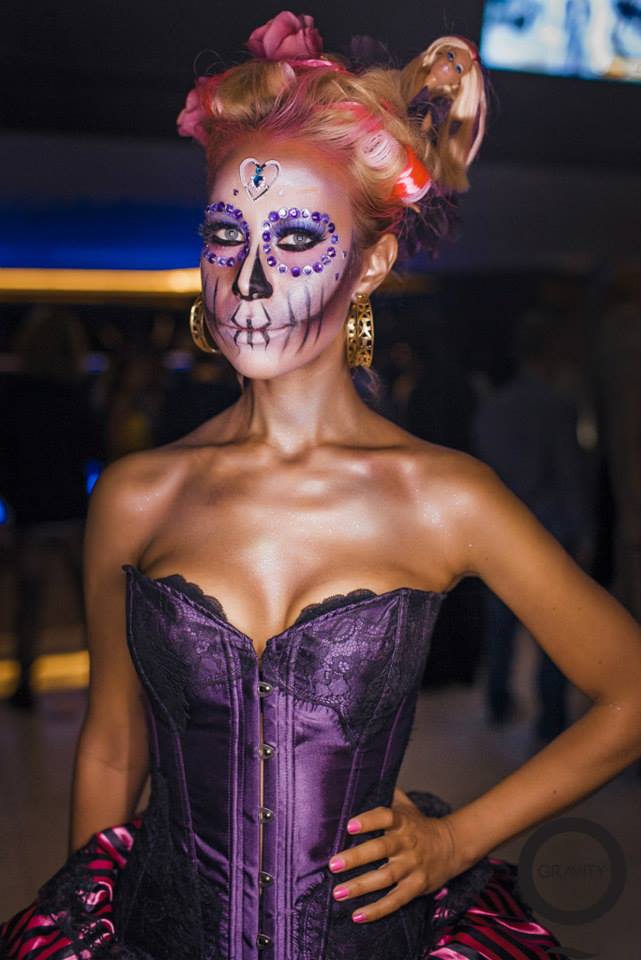 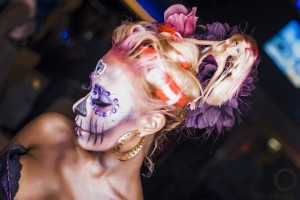 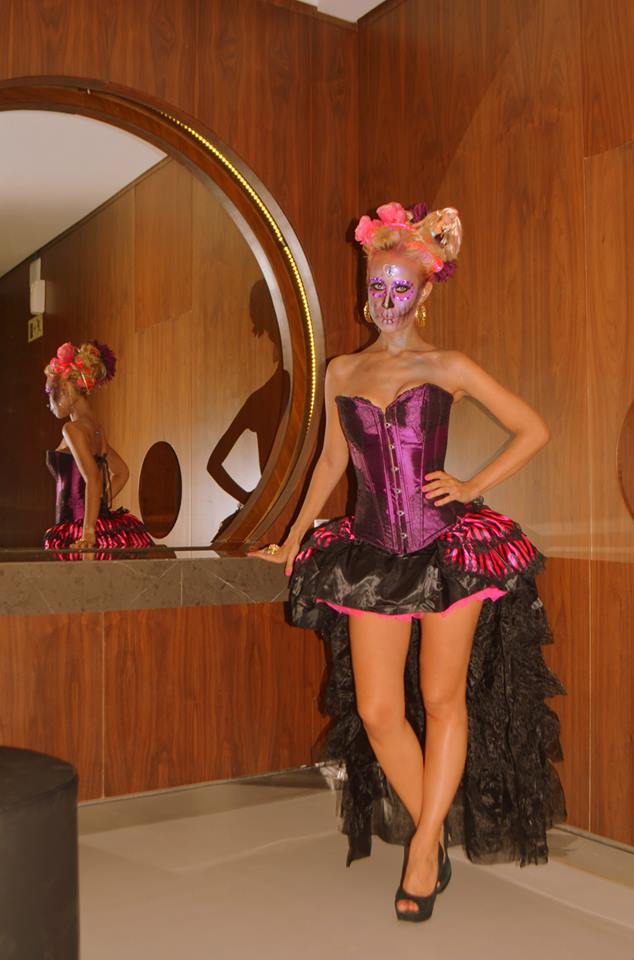 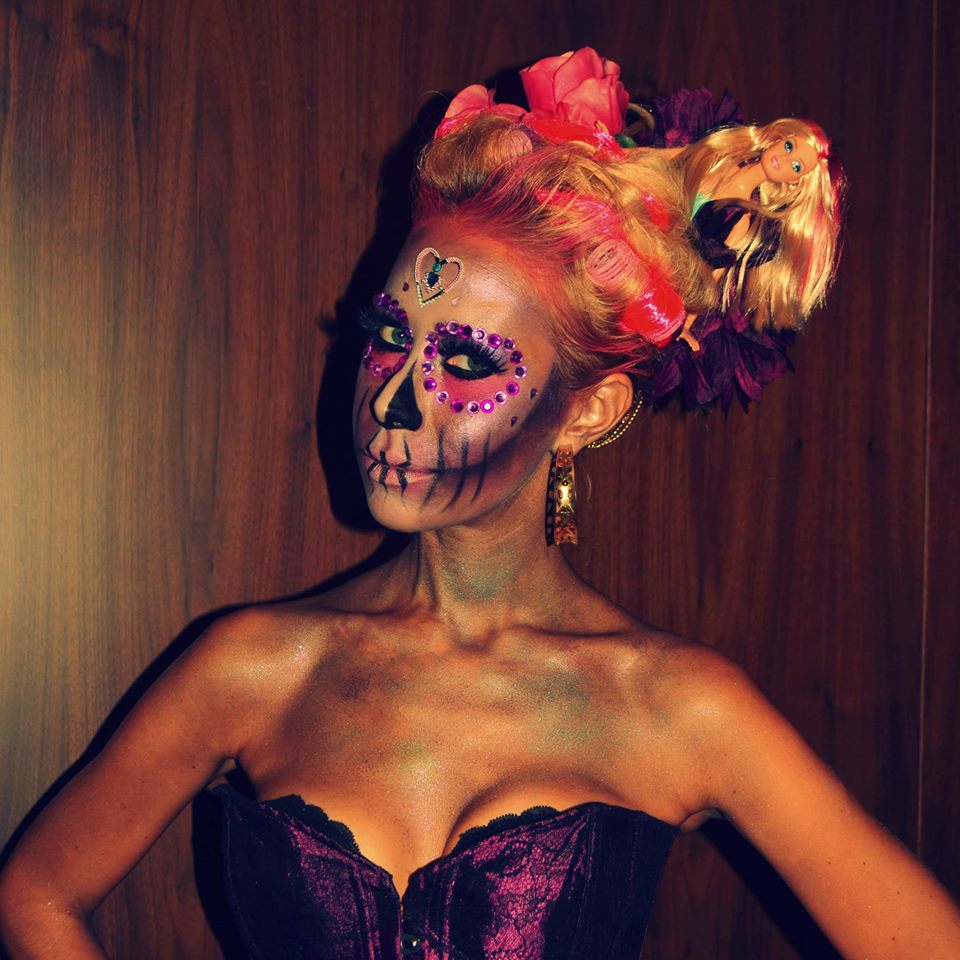 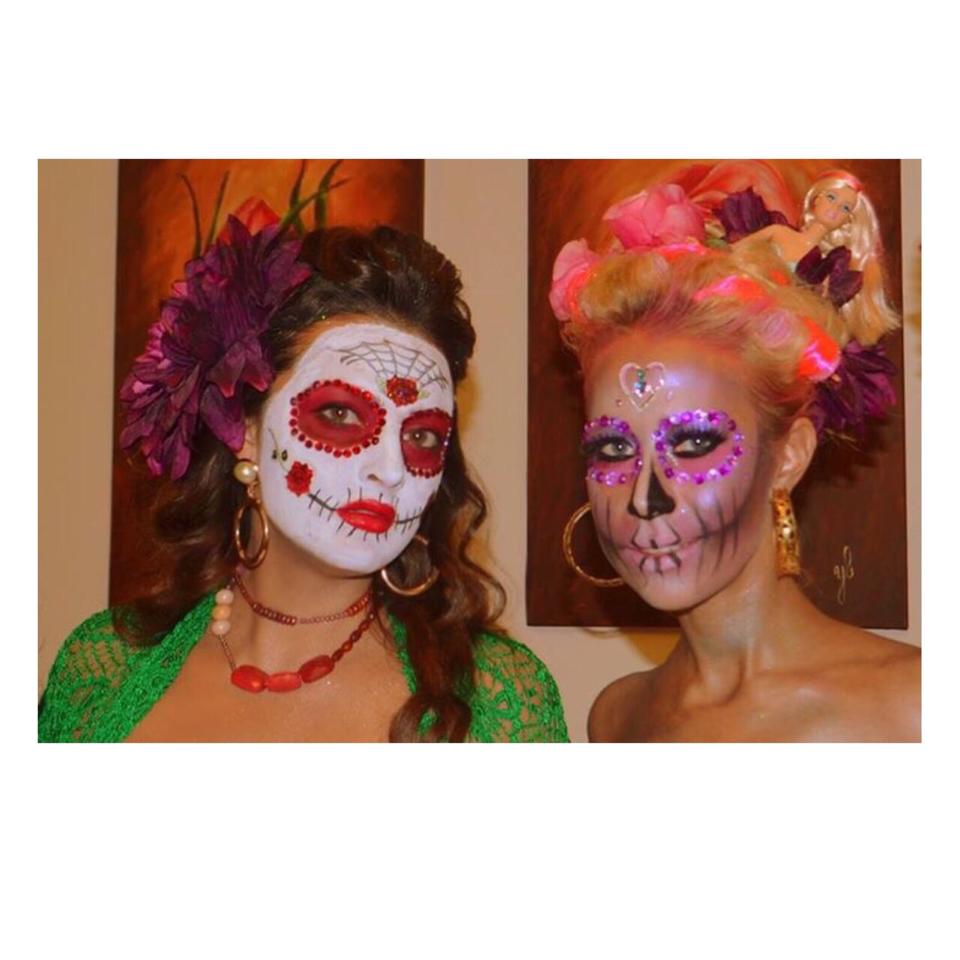 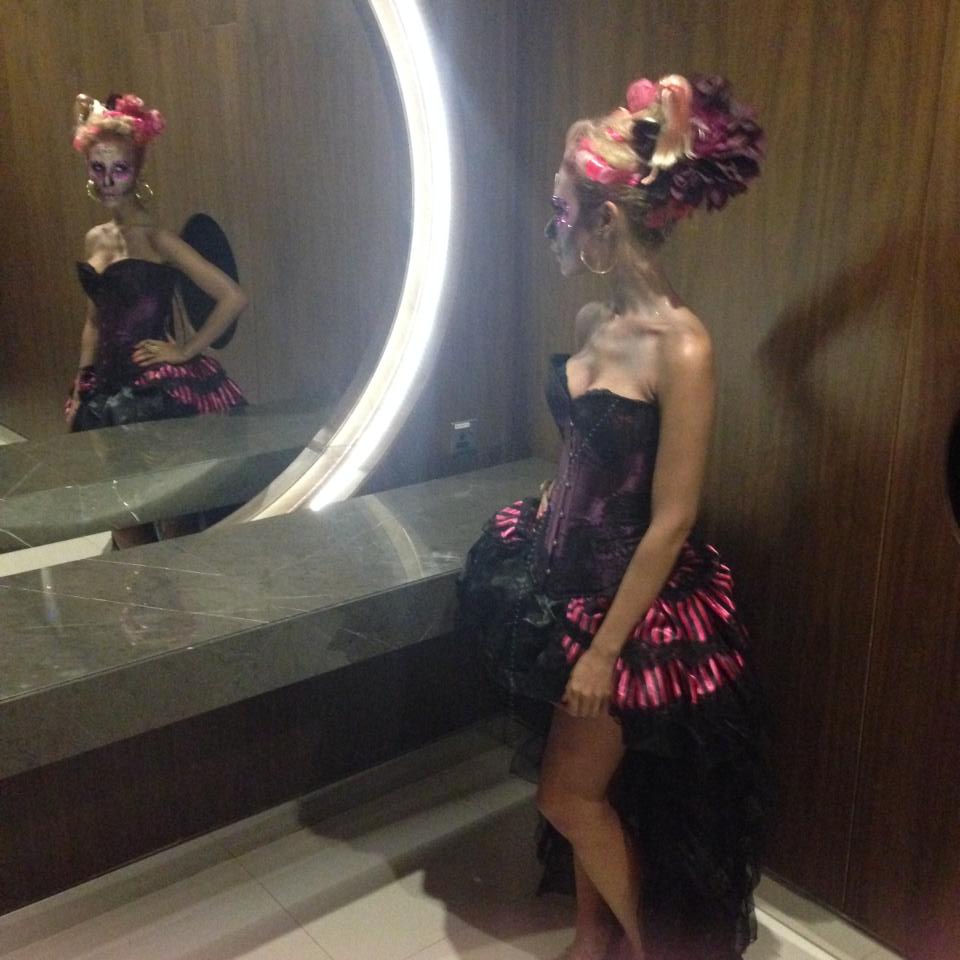 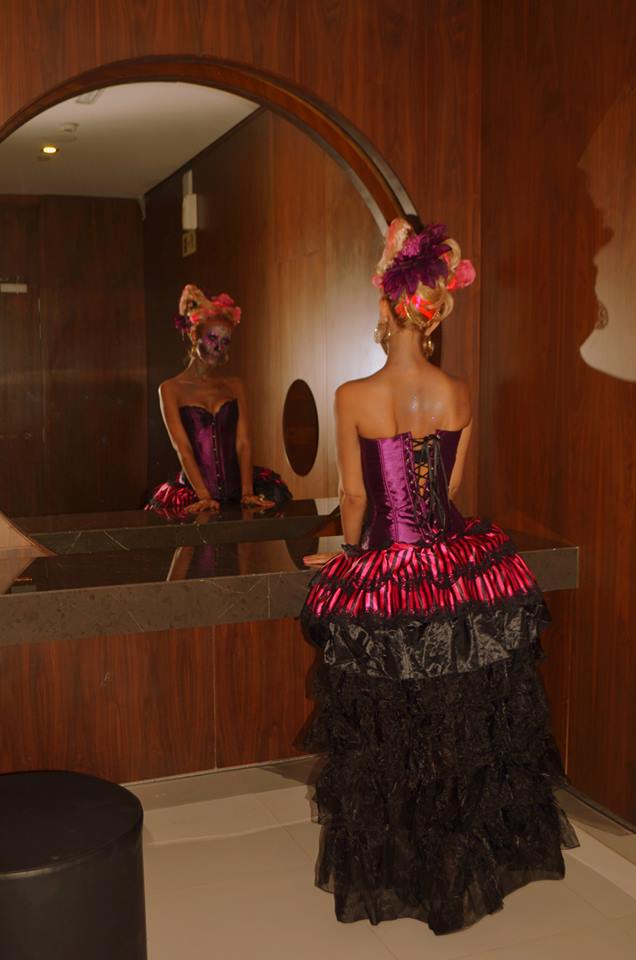 Why We Still All Want To Be Cher From Clueless 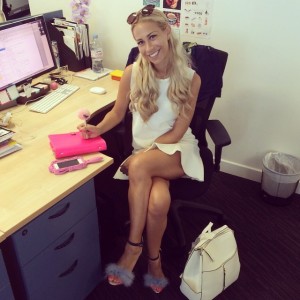 Today, I was laughed at for calling the film Clueless seminal. “Yes. Seminal,” I repeated, “Like Citizen Kane. Or Glitter with Mariah Carey.”

“It made waves!” I continued, loudly. “We ALL still reference it. ALL THE TIME!”

“It’s an IMPORTANT FILM!! Important! It had an electronic wardrobe in it! And Turk from Scrubs!”

Awkward silence in which he looks for the toilets.

I then sit, quietly seething, in an unspoken stalemate with my under-educated companion. I know it’s seminal and you know it’s seminal but unfortunately, dear reader, there are some people out there who didn’t get the memo. Feel free to quote any of the below at them if you’re ever faced with a similar predicament when called on to defend the best film of the Nineties (you can tell them I said that, too)…

1. The right outfit can make or break you 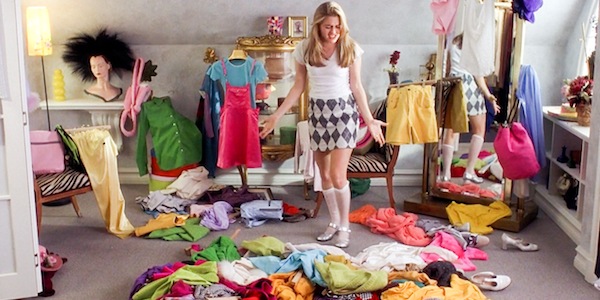 The real reason that Cher failed her driving test? Clue: it had nothing to do with her near-miss with a cyclist, or hitting a parked car as she passed it. It was because she couldn’t find her white collarless shirt from Fred Segal; her most capable-looking outfit. Cher understood the importance of a sartorially good first impression, but more than that, fashion’s innate ability to just make you better at stuff. I used to get waaaay more done in my freelance years working from home when I’d put a blazer on over the top of my pyjamas. Empirical proof that tailoring fixes lives.

2. What looks like a perfect life to others may be very far from the truth

More pertinent now than ever, Cher’s observation that “Okay, so you’re probably going, ‘Is this like a Noxzema commercial or what?'” was quickly followed up with, “But seriously, I actually have a way normal life for a teenage girl.” Underneath the Calvin Klein dresses, Beverly Hills mansion and ridiculously swooshy hair, Cher was keen to remind us that she was just like you and me. She still worried about boys, grades, popularity… still got held up at gunpoint in an Alaia dress, had a wildly inappropriate relationship with her ex-stepbrother and made an embarrassingly full-on play for someone who was very obviously gay. I don’t know about you, but that’s my youth in a nutshell, right there.

She did have a point, though. In our current Instagram-frenzied society, life through a very flattering filter has become the norm. It’s easy to think other peoples’ existences are nothing more than the perfect snapshots they choose to share with us. Spontaneous, Valencia-tinted choreography has reached a dangerous peak. We’re standing on chairs to take pictures of our Special K and pretending we pack a different Diptyque candle in our gym kit every day. Noone owns that much Feu de Bois, trust me.

Saving yourself for Luke Perry? Your cultural references might need a bit of an update grandma, but I like where your head’s at. Cher’s unapologetic status as ‘a virgin who can’t drive’ made her the poster girl for not settling for anything less than the very best. Not only did that mean for boys (to be fair, Elton wore a brown suede bomber jacket, I don’t care how devastating his smile/ who his father was. And neither did she), but also for her family; encouraging her dad to be healthier, for her outfits; never trusting mirrors, only polaroids, and for her friends; with Tai’s makeover stretching far beyond some Wella plum mousse to include ‘something good for mankind or the planet for a couple of hours.’ Inspiring, really. Now if you need me, I’ll be with Marky Mark persuading him to plant a celebrity tree…

4. Often, the darkest hour comes before the dawn

Darkest hour [dahrk’est ouuh] adj., n. Also known as an overwhelming sense of ickiness. Cher’s tidy world might have been upside down, her newly-made-over best mate turning into a monstrous mini-me, spectacularly failing her driver’s test and quite possibly screwing up her dad’s million-dollar litigation case, but what did she do to remedy it all? She went shopping! Problem solved.

Ok, actually there may have been more to it than Rodeo Drive. We’ve all been in those situations where nothing seems to be going right, but Cher taught us that sometimes you need to hit rock bottom before things can begin again. Joking aside, Steve Jobs once gave a speech where he said, “you can’t connect the dots looking forward, you can only connect them looking backwards. So you have to trust that the dots will somehow connect in your future.” I’m preeeeety sure he was referencing Cher’s iconic meltdown-turned-redemption when he wrote it. Nice one, Steve.

5. Having a touch-screen wardrobe is, and always will be, the greatest accomplishment in life

SIGH. It’s been nearly twenty years. I mean, surely someone could’ve done a better job at inventing this by now? In much the same way that it pains me that they haven’t produced the hoverboards from Back To The Future 2, I regularly lament that Cher’s computerised wardrobe isn’t available on the app store yet. Science people! Stop growing human ears on the back of mice! Stick a pin in the large hadron collider (just for the time being. You can get back to it after lunch), and concentrate your efforts on this! Points one to four are made totally redundant if we have to dress ourselves in the morning for any longer without it. Cher would want it that way. 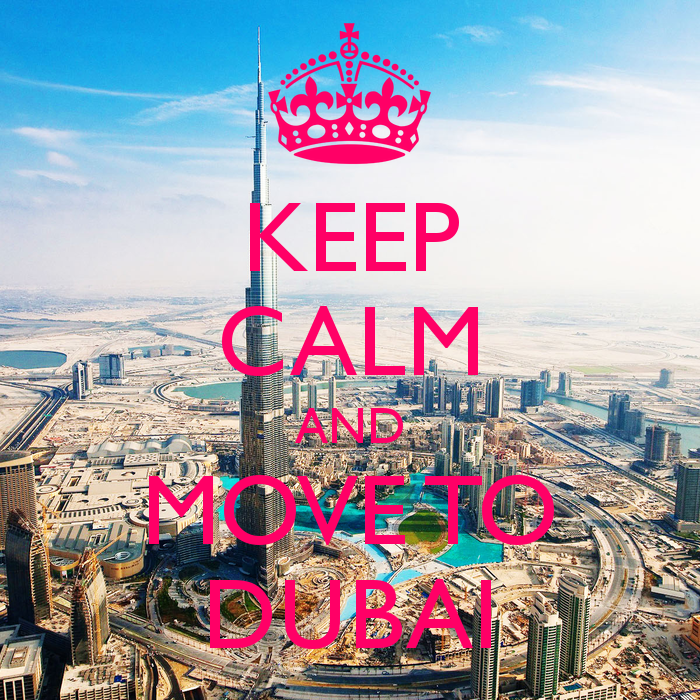 I’m not really sure what I was expecting when I upped sticks from my pokey, damp-riddled 2 bed flat off the Holloway Road and skipped town all the way to the desert. Some of my more optimistic friends insisted I would end up marrying rich, or unwittingly striking oil when I got my stiletto stuck in the pavement. Maybe both. Who knew? Dubai was my oyster, and London soon to be a distant memory; something I looked back on fondly from a safe distance, preferably whilst fanning myself with tax-free money. What I hadn’t anticipated was exactly how hard it would be. Obvious, with the benefit of hindsight, but at the time obscured by excitement and blinding sunshine. So now, on the year anniversary of when I landed in the desert, I feel like I can hand out a good deal of retrospective guidance. Haughtiness will be kept to an absolute minimum, I promise. Mostly because I have a pathological aversion to following my own advice.

Hardly an affliction specific to Dubai, but my half-stone weight gain/ very close relationship with the delivery guys at Urban Bistro can attest to the fact that I’ve got a bit more, er, relaxed. A combination of the unrelenting heat, maid that comes three times a week and my already-rampant mañana attitude has meant that laziness has infiltrated my life to the point where I’ve found myself idly wondering if I could hire someone to wake me up with a plate of scrambled eggs in the morning. (Incidentally, I know someone who knows someone who has actually done this.) Positives: I haven’t had to empty a bin in almost 5 months. Negatives: I have forgotten how to be a functioning human being.

Ex-pat rage (or EPR amongst friends) is a very real struggle. No wonder everyone does so much bloody yoga. I’ve started to think of London as where I earned my training wheels (“Stand on the RIGHT. STAND ON THE RIIIIIIIGHHHHHHTTTTTTT!!!”) whereas now the merest whiff of incompetence turns me into a livid, steaming she-devil. And it’s usually my fault. Note to self: start yoga.

3. Think outside the bubble

See that? That’s life beyond our shores. Life that, if you’re not careful, you’ll forget even exists. It’s all too easy to hunker down into our own little bubble, ignoring the world at large. Skype your folks, call your pals… even if it’s only to tell them in detail about how your tan’s coming along. They won’t know this anymore, because they’ve probably de-friended you on Facebook, citing ‘yachts’ as a reason. But in all honesty, if it wasn’t for Gogglebox and The Guardian website, I doubt I’d know anything apart from what the best ladies’ nights on The Palm are. Keep abreast, kids.

There are some things that are cheap as chips. I hold these very dear. Fags. Taxis. Manicures. A very clean and efficient metro service. (So I’ve been told, anyway. See ‘taxis’). And then there are things that aren’t. The fact that I’ve still only got a very hazy grasp of the exchange rate means that most of the time I haven’t even noticed. 100 Dirhams? That’s like a fiver, right?

Still, if I can refer back to my pokey, damp-riddled London pad for a minute, I can tell you that I’m only paying a smidgen more to live in the Marina, can walk to work (in your FACE, Piccadilly line!) and that my current bedroom is the size of my old one, bathroom, kitchen and hallway put together. I could, if I was so inclined, do two cartwheels and a handspring to traverse it. It’s bloody brilliant. Side note: I may be smug, but I’m also broke.

Boat parties and all-you-can-inhale brunches? Year-round sun and tax-free livin’? Really, really, ridiculously good-looking people, almost constantly in swimwear? This is not normal. So don’t take any of it for granted, not for one second. Everyone’s got an opinion on this place – and it’s usually the ones that have never set foot in it that give it the hardest time. Still, that’s why they’re not here. Dubai is no place for the small-minded, or for those who equate shiny and new with soulless and vapid. Au contraire, Rodders – it’s bubbling with potential, excitement and big ideas. They might not include crowdfunded comic book stores-cum-cereal cafes that only accept bitcoin, but they ARE pursued with passion by dreamers, adventurers and daredevils. A lot of them. All in one town. Show me one other place on the planet quite like it. I  might move there next.