Viewing posts from the Food category 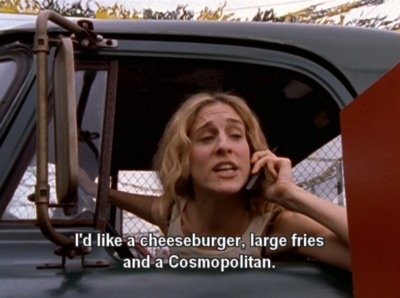 I always do three obligatory things (incidentally, all food-based) within the first 24 hours of me being back in London. The first is have an enormous cuppa in my mum’s kitchen, where the tea is and always will be the best on earth. The second is sit in the window of Pret on Conduit Street (glamour) and eat the lunch I had every day for about three years – the Chef’s Special chicken salad. I’d like to say it’s some kind of transcendental mindfulness technique to remind me how far I’ve come/ to always sit and reflect, but it isn’t. It’s just cos it’s a really good salad. Ask me about it. I will talk to you about the lack of pistachios in all other salads. 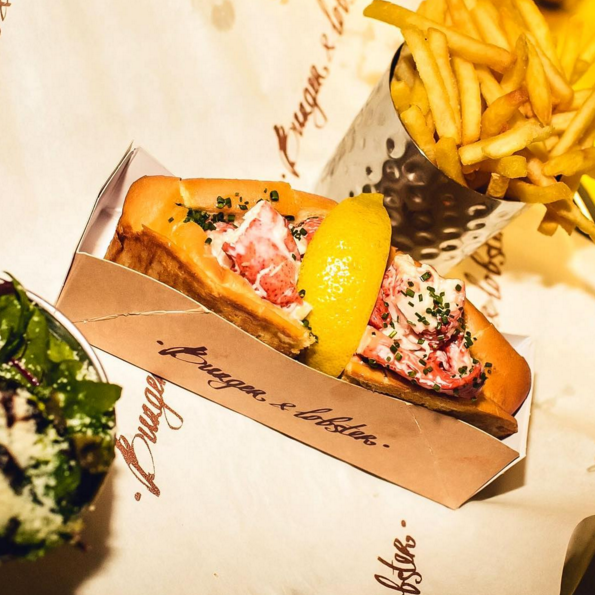 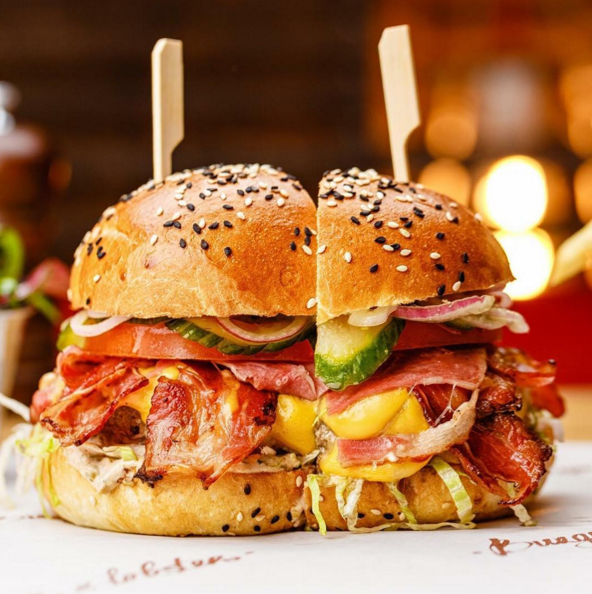 Anyway, the third mandatory back-in-town manoeuvre is making a beeline for the foodie hotspot where dreams are made, Burger & Lobster. Their lobster rolls are like a hug; one of the most satisfying things to eat in the capital, and that includes a salt beef and mustard bagel at 3am from Beigel Bake. So when they announced that it was opening out here in the dustbowl, I was more than a little excited, even if it did mean I’d have to leave a gaping hole in my London repertoire.

The worry was, would it be as good as the original? The buttery brioche loaf, incredible mayo-covered Atlantic lobster filling and salad dressing of legend? Them’s big shoes to fill. 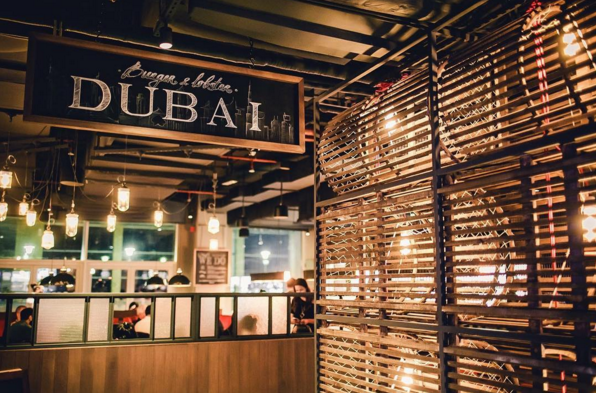 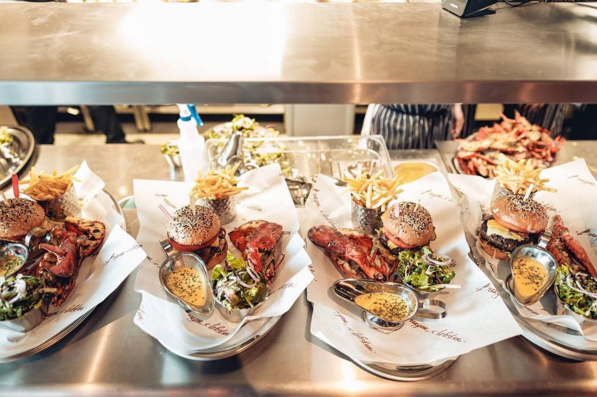 In a nutshell, whoever is in charge of copycatting the menu has done a damn fine job – if I took a bite and closed my eyes it was like I was back on Dean Street. A teleportation device, right there in DIFC. Good work, guys.

From beards to shoes to beaches, my Instagram stalking trajectory has been both complex and cerebral at the best of times. I think I’ve finally settled on a last obsession, however. Cake. (Or, to paraphrase Rihanna, cake cake cake cake cake cake cake cake cake cake). There are so many talented bakers out there – Sydney seems to be a particular hub – but here are the top 12 that are giving me scrolling RSI. And I don’t even mind.

Look at this beautiful beast below. Just LOOK AT IT. Popcorn, gold leaf, bits of Twix bar, iced gems, petals, flowers, hundreds and thousands… This must be what happiness looks like. 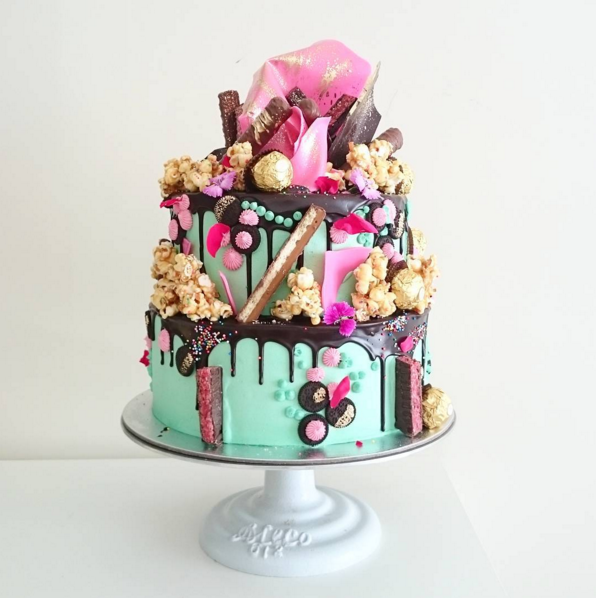 Like the above, Katherine’s also based in Sydney and describes herself as a ‘dessert creative’. Possibly the best job title in the world, no? Also: I would live in her fridge. 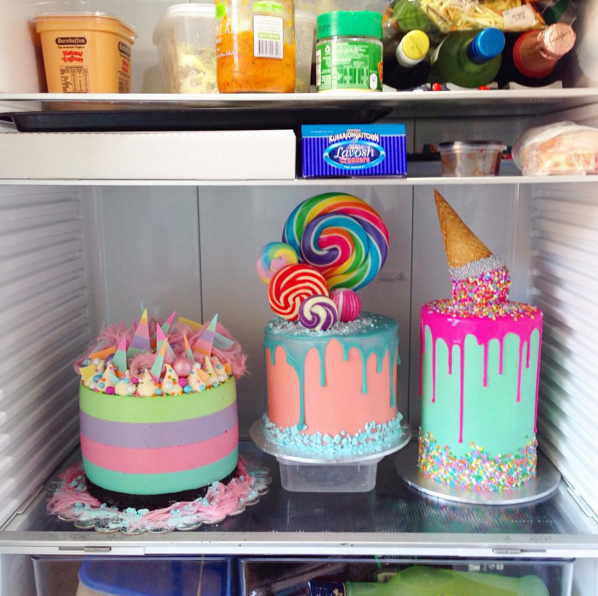 An established name on the cake scene, Lily Vanilli has been making me fatter but happier since 2008. I’ll no doubt be poorly attempting to make these glittery cherry cupcakes at some point in the near future. 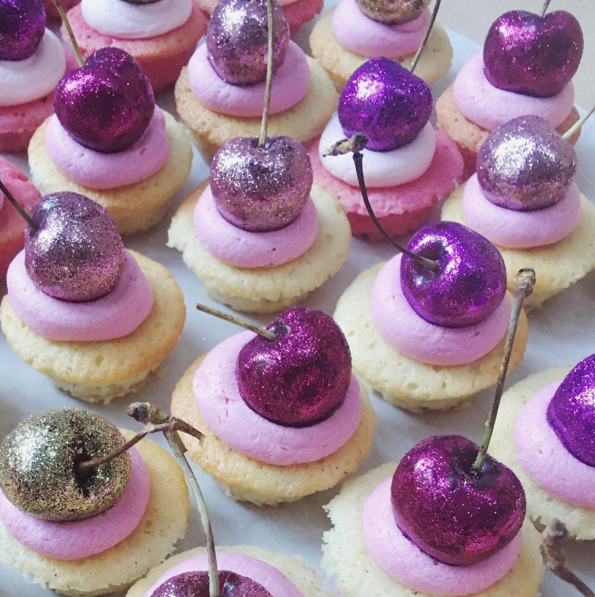 From Fruity Pebbles to m&m’s and dried fruit, you name it and California Donuts have shoved it on one of their joyous confections and sent it out into the world to make all our lives better. 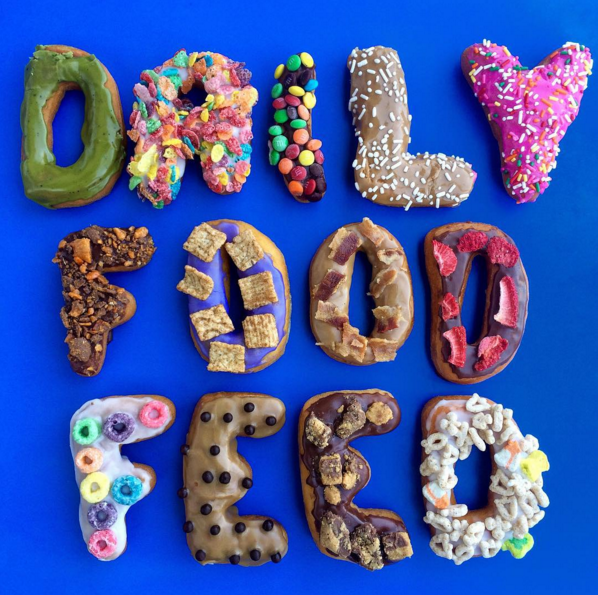 The internet melted when it got wind of New Orleans-based @joythebaker’s offshoot Instagram account, Drake On Cake. Simply, she pops his lyrical stylings onto baked goods and we all go nuts. Understandably. 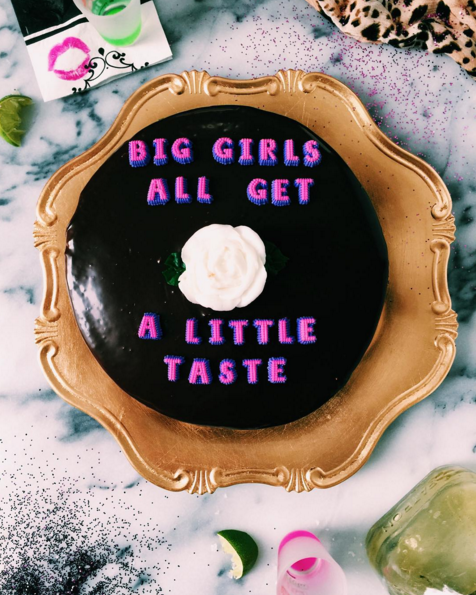 A little ray of sunshine pon de internet, LA’s Kelly Mindell makes cushions and costumes alongside sweet treats, and she deserves recognition just for the fact that she’s managed to combine two of my favourite things: breakfast, and cake. 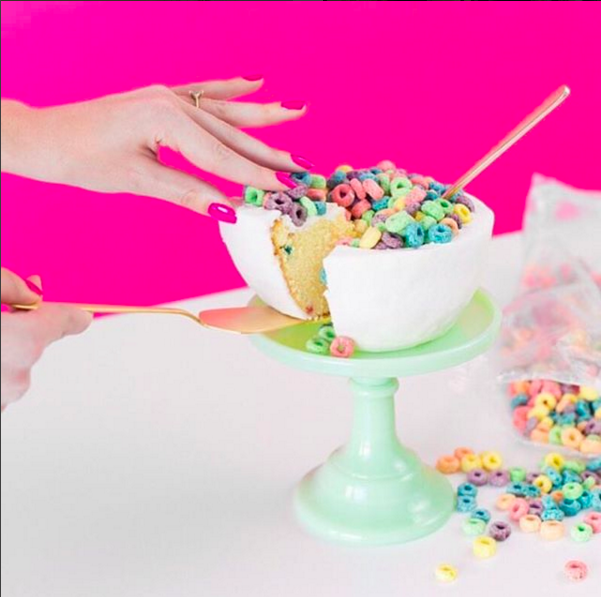 Working out of East London, Carla Fox’s creations are witty and pretty and eye-poppingly beautiful all at the same time. Round of applause for these killer strawberries below, please. 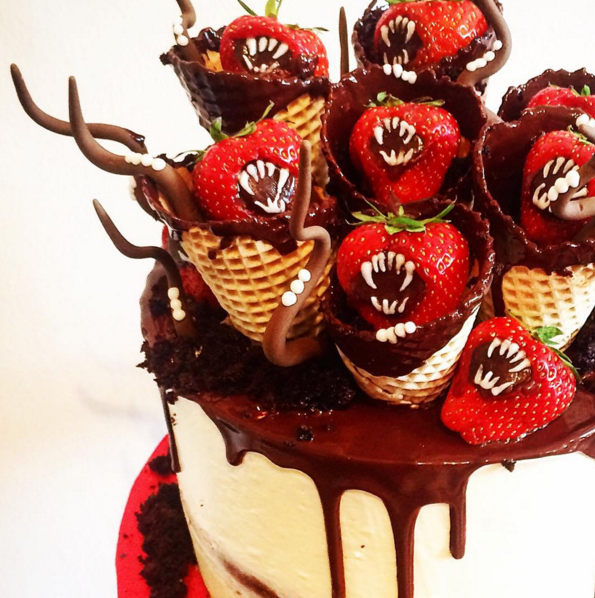 Again, based in Sydney (maybe there’s something in the water out there), Nathan makes candy-coloured fairy floss and fashions it into fantasy desserts. Unicorn Poop Macaron, anyone? 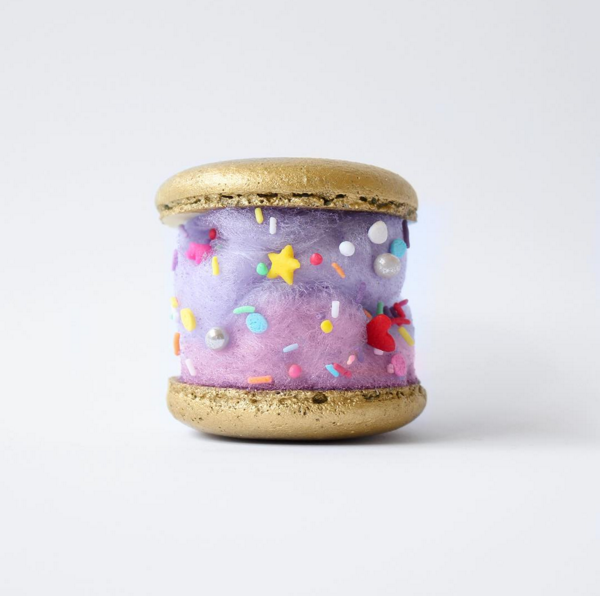 Anyone who shoves a cocktail umbrella in a doughnut and calls it a party is a-ok in my book. Vicky’s East London Donutterie has not only done that, but also pizza slice-shaped versions and the ultra-pretty pastel ones below. 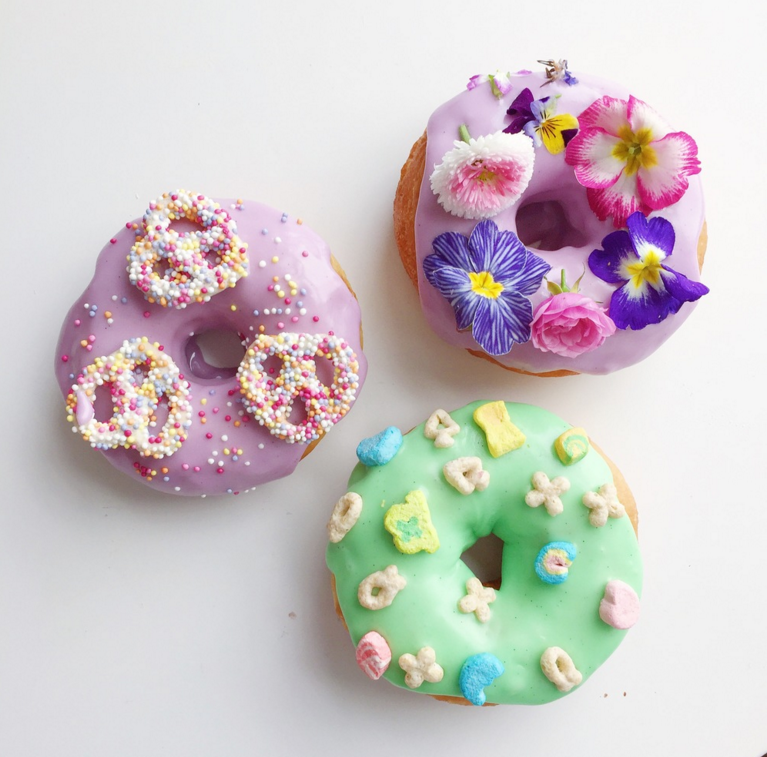 “Sydney office worker by day, cake decorator by night.” Cliff, you not only make my mouth water, but you make me wonder what I would choose if I were to begin moonlighting. 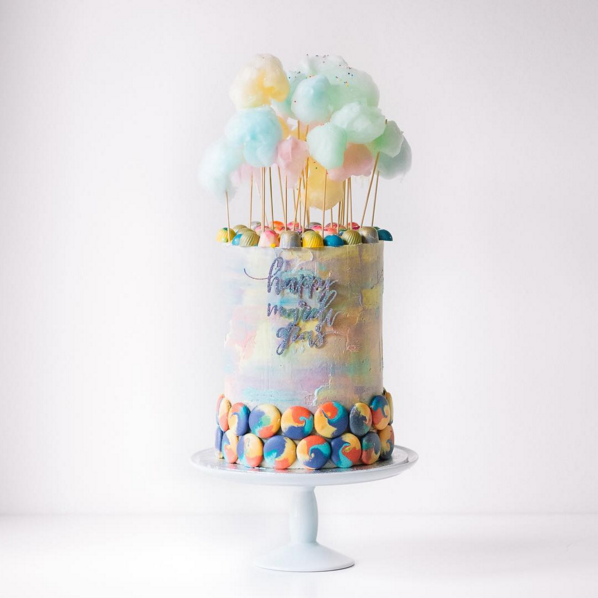 Who knows if I would eat it if actually ever faced with one of The Purple Cupcake’s mini masterpieces. I might just stare at it for hours instead. 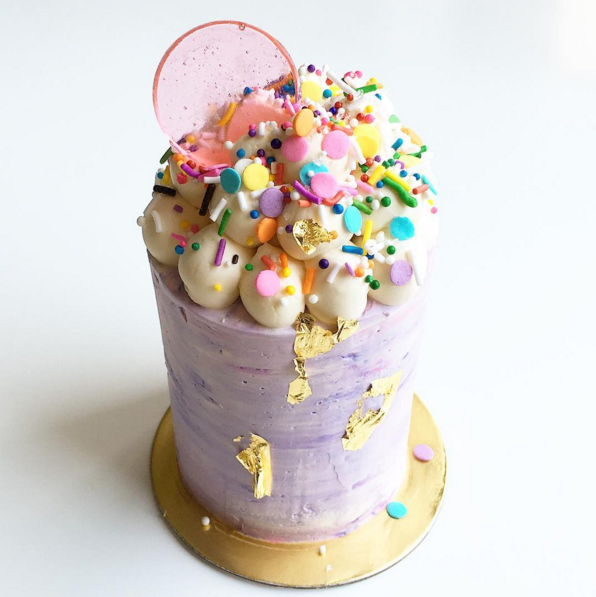 Best name ever, right? Also in Sydney, also responsible for half of the fancy-pants cakes on the internet, Bakedown Cakery’s Jen describes herself as a ‘merriment maker’. How can you not fall for that? 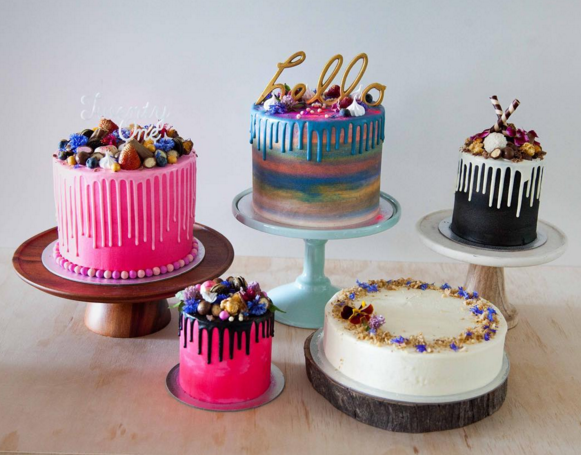 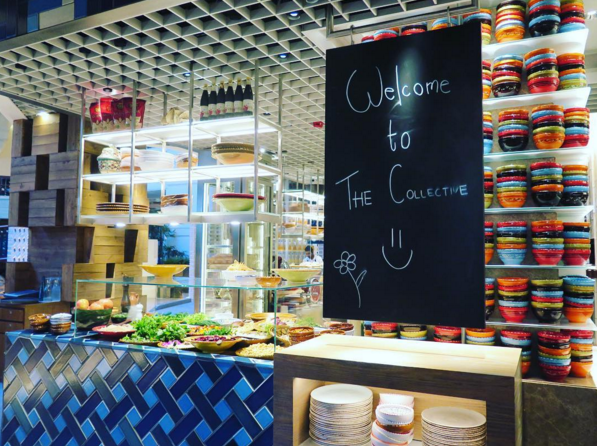 How long do you reckon it takes living in Dubai before you become ruinously spoilt? Not necessarily in a princessy, I-can’t-make-my-own-bed kind of sense (although that, too, happens to the best of us), but in a culinary vein, where if you’re presented with less than 35 different types of eggs at brunch that you turn your nose up and wonder where it all went wrong. I’d hazard about six months. So to be genuinely impressed after that (and I’ll be really honest here) is quite a rarity. The Collective, a new restaurant in the Grand Hyatt, however, is one of those places that makes your heart beat that little bit faster. No mean feat. 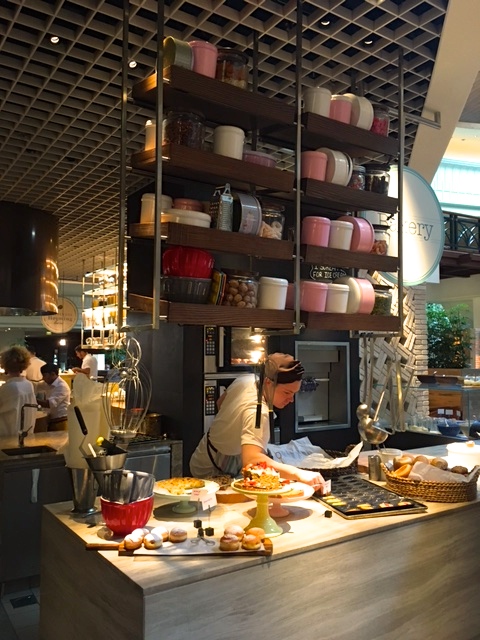 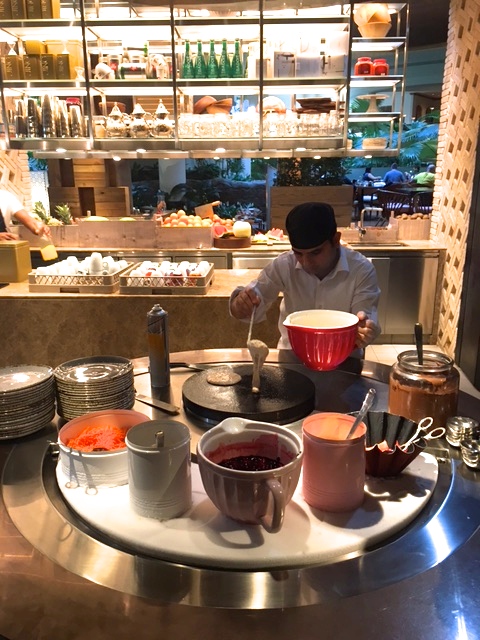 I’ll lay my cards on the table. It’s the best breakfast I’ve ever had. I know, I know. It sounds like I’m either a) doing the PR for the place and/ or b) I’ve been bribed to say it changed my life. Neither of those things are true. Firstly, this is no cookie-cutter, traditional hotel breakfast. Four different connected restaurants in one allow you to wander through, buffet-style, heaping your plate with things from the boutique bakery, Levantine Emporium, Indian cafe and grill bar – all for Dhs135. Dishes are served up in mismatched pots and pans, on cake stands and giant trays, giving it an eclectic, street food-style energy. Not only is the actual food incredible and all made on-site (we watched the madeleines and croissants being baked and then served to us hot from the oven), but the buzz is contagious. At every station there’s a least one chef from the region to give it a real authentic, home-made flavour, and they are the friendliest, sweetest bunch of people I’ve come across in a long time. 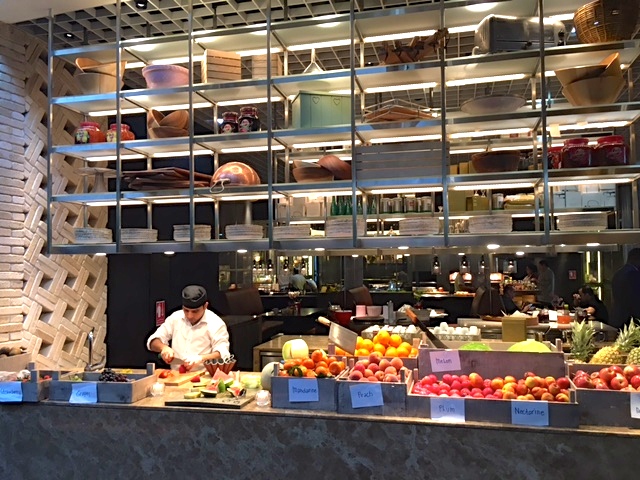 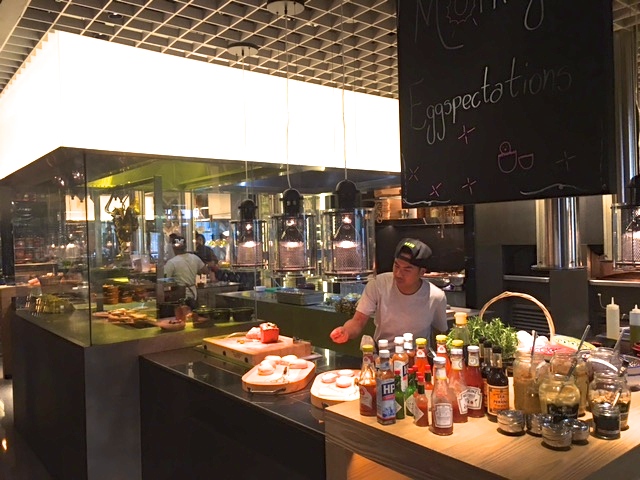 Special shout out to the healthy pancakes (made with egg white, banana, oats and honey), cheese shawarma served on Turkish bread with honey (complete with honeycomb) and exceptional coffee. I’ll be back for lunch (and dinner most likely. AND probably the Friday brunch). Basically, if you can’t find me – I’ll be there.